Greek Economy to Shrink More Than Expected Next Year 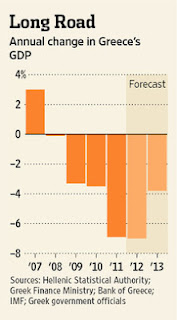 Greece's economy will contract more than projected in 2013, its sixth year of recession, under the weight of the next round of austerity measures demanded by international creditors, according to a draft budget the government will submit to parliament Monday, two senior officials said.

The Greek government sees the economy contracting at an annual rate of 3.8% next year, a senior government official said, in line with private-sector economists' expectations and suggesting that earlier forecasts from Greece's international creditors were overly optimistic.

In the spring, the European Commission, which backs Greece's bailout along with the International Monetary Fund, estimated a zero growth rate for the country next year, suggesting it would be poised for a modest recovery after its depression-era-like contraction.

The budget will also include a large chunk of the €13.5 billion ($17.36 billion) in required spending cuts and revenue measures that international inspectors will assess Monday as they resume meetings with Greek government officials on steps needed to open the way for the country's next aid tranche from its second €173 billion bailout.

"Cuts of some €7.8 billion will be included in the budget on items such as government operating expenditures," said an official from one of the parties involved in the coalition government.

More
Posted by Yulie Foka-Kavalieraki at 1:34 AM