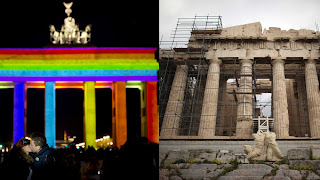 The banner headline across the front page of Germany’s Bild newspaper summed up the reaction of many of its readers to the demonstrations in Athens that greeted Angela Merkel, German chancellor.

“Germany does not deserve THAT” it said, with a big red arrow pointing at a Nazi swastika being waved by the “repulsive” protesters.

Bild is a paper that frequently plays on the prejudices of its readers, but it also has a good feel for the popular pulse. More than two years ago, when the Greek financial crisis broke, the newspaper sent a journalist round the streets of Athens trying to persuade passersby to exchange their euros for Greek drachmas – the former national currency.

This triggered a xenophobic war of words and pictures between the national media in the two countries, just as Ms Merkel and her fellow European leaders were wrestling with the problem of how to rescue the Greek economy. Ever since, popular opinion in Germany and Greece has been deeply polarised, with a majority of Germans in favour of seeing Greece leave the euro and a majority of Greeks blaming Germany for the drastic austerity measures that have been forced upon their successive governments.