Greece Used to Be an Economic Miracle, Then the Socialists Got in 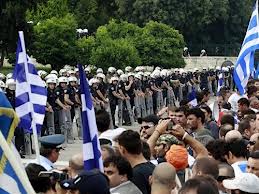 I am lucky enough to be writing from the Cato Institute, which is holding a conference on the euro-crisis and the European welfare state today. One of the speakers, Aristides Hatzis, is a Greek lawyer who helps run the greekcrisis.net blog, which is well worth a visit. During his time to speak Hatzis laid out how extraordinary Greece’s economic achievements were in the years up to and following the brutal Nazi occupation. A copy of the arguments made can be found here.

From 1929 to 1980 the Greek economy’s average growth rate was 5.2 percent. In that time period Greece experienced dictatorships, occupation, civil war, and a military junta. It was only in 1974 that Greece began to resemble something like a liberal democracy. Some years later Greece was accepted into the European Community, as Hatzis explains:


Seven years after embracing constitutional democracy the nine (then) members of the European Community (EC) accepted Greece as its tenth member (even before Spain and Portugal). Why? It was mostly a political decision but it was also based on decades of economic growth, despite all the setbacks and obstacles. When Greece entered the EC, the country’s public debt stood at 28 percent of GDP; the budget deficit was less than 3 percent of GDP; and the unemployment rate was 2–3 percent.