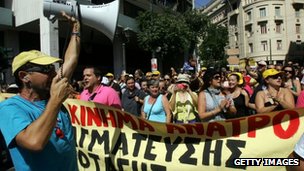 Greece is predicting its economy will shrink by much more than previously estimated this year.

Its economy will contract by 6.5% this year, worse than a previous estimate of 4.8% in March suggested to its bailout lenders, it said in a draft budget submitted to parliament.

Greece also said its economy will shrink for a sixth year in 2013.

About 8bn euros worth of cuts have been proposed for 2013, covering public-sector pay, pensions and welfare.

The economy will contract by 3.8% next year, the Greek government predicted.

The deeper contraction in the economy means that Greece will have to find extra money.

This may occur through further spending cuts and tax rises, or through additional money from its lenders - perhaps in the form of write-offs or postponements of what Greece already owes them.