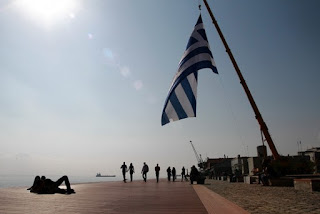 Greece will need an extra €30 billion ($39 billion) in aid from its international creditors through 2016 to make up for a deeper-than-expected recession and a two-year delay in budget targets, senior European finance-ministry officials were told Thursday in their first detailed discussion on how to keep the debt-ridden country in the euro zone.

Finding a solution to Greece's debt dilemma is set to occupy euro-zone policy makers for much of the autumn, forcing them to make politically unpopular decisions just as they try to stabilize larger countries like Spain.

The extra funds would mean Greece's debt load would still be around 140% of annual economic output by 2020, said two European officials. That is far above the 120% that was deemed sustainable when the country's second bailout package was agreed upon in February. Because of that, the International Monetary Fund continues to push euro-zone governments and the European Central Bank to write off some of the money they have lent to Greece—an option that remains unacceptable to most governments, the officials said.