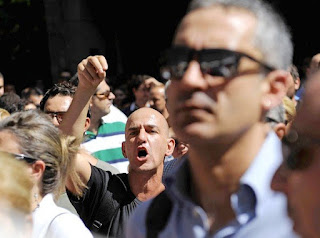 With a new batch of budget cuts looming, Greek officials have made it clear that they must target the state's nearly 1-million-strong army of civil servants, shaving salaries, benefits and bonuses for the third time in three years.

"We're doomed," says social worker Dmitra, 44, who asked that her last name not be printed for fear of reprisals. "Whoever said we were privileged and protected?"

And yet, many Greeks emphatically contend that government workers are protected. At least they still have a job.

Since the financial crisis erupted here in 2009, the unemployment rate has vaulted to 24% from 7.8%, adding 800,000 Greeks to the ranks of the unemployed, for a total of 1.2 million. But all the job losses have come from the private sector.

"It's like a ship is sinking and there aren't enough safety rafts, but public sector employees, because of their lifelong job security status, are on deck, rushing on board the boats safely," says Nikos Tsafos, a Washington-based economist. "Does that seem fair?"

The civil service has long been a sacred cow. Successive governments, mainly headed by the socialist PASOK party, for decades stuffed it with political — and at times, doltish — hires, swelling it to a fifth of the nation's 4.2-million-member workforce in 2010.