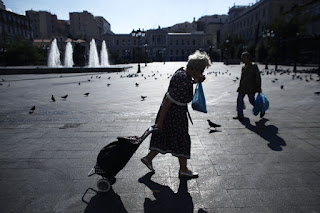 Greece is spiraling into the kind of decline the U.S. and Germany endured during the Great Depression, showing the scale of the challenge involved in attempting to regain competitiveness through austerity.

The economy shrank 18.4 percent in the past four years and the International Monetary Fund forecasts it will contract another 4 percent in 2013 as Greece struggles to reduce debt in exchange for its $300 billion rescue programs. That’s the biggest cumulative loss of output of a developed-country economy in at least three decades, coming within spitting distance of the 27 percent drop in the U.S. economy between 1929 and 1933, according to the Bureau of Economic Analysis in Washington.

“Austerity has been destroying tax revenue and therefore thwarting the intended effect,” said Charles Dumas, chairman of Lombard Street Research, a London-based consulting firm. “There’s no avoiding austerity, though, because these people have no borrowing power. The deficits are there.”

Greece’s restructured bonds have benefited amid speculation that creditors are poised to release more bailout funds. Greek bonds maturing in 2023, which yielded more than 30 percent at the end of May, now yield about 16.4 percent. The next block of aid is slated to total 31 billion euros ($40.5 billion), mostly to recapitalize the nation’s banks.