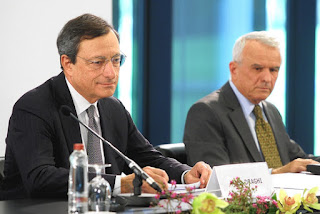 European Central Bank President Mario Draghi on Thursday said the bank's new bond-buying program is ready to activate, and put the onus on vulnerable countries such as Spain to first seek and receive assistance from other euro-zone governments.

The ECB said in September that it would purchase unlimited amounts of government bonds of Spain and other euro states that face high borrowing costs, provided the countries first seek assistance from the bloc's rescue funds and agree to international oversight of their fiscal and economic policies.

"We are ready [to activate bond purchases] and we have a fully effective backstop. Now it's in the hands of governments," Mr. Draghi said after the ECB's monthly meeting, which took place outside the Slovenian capital of Ljubljana.