Europe Intent on Saving Greece Despite Lag in Reforms 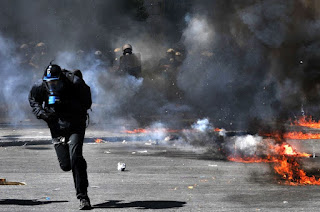 Greece's creditors have been less than impressed with the country's willingness and ability to carry out much needed reforms. But Europe is likely to continue supporting the country anyway -- out of fear of the consequences should the country go bankrupt.

They're at odds, once again. The recent standoff in Athens between Poul Thomsen, chief envoy of the International Monetary Fund (IMF), and Greek Finance Minister Yannis Stournaras was, by all accounts, rather heated. Stournaras even threatened to resign rather than implement the cuts Thomsen was calling for, reported the New York Times.

"It doesn't matter to me," the IMF envoy allegedly replied, and then left.

On Friday, Sept. 21, it was time for the "Men in Black," as the Greeks call them, to depart once again -- without having accomplished anything. The troika, consisting of representatives of the IMF, the European Commission and the European Central Bank (ECB), had had enough.

It isn't the first time that Thomsen and his colleagues have ended their visit prematurely, and it's also nothing new that they are unable to agree with their Greek counterparts over what is to be done. At the moment, the effort to rescue Greece is mainly characterized by one thing: a gloomy sense of déjà-vu.

Despite his words, of course it matters to Thomsen whether or not he and the Greeks reach an agreement. The goal, after all, is to rescue the country and make sure it stays in the euro zone, no matter what the cost -- which is why the three envoys from the troika returned to Athens on Sunday. They want to finally conclude the negotiations over a package of austerity measures designed to save more than €11.5 billion ($14.7 billion). It was supposed to have been concluded in June and is a condition for the second loan agreement. The government also hopes to collect €2 billion in additional tax revenues.