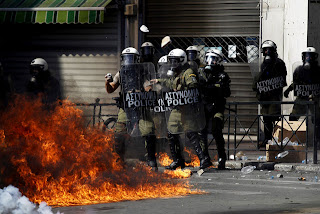 Europe faces a month that may decide the success of the European Central Bank’s bid to end the debt crisis, starting with the resumption of talks in Athens today between Greece’s international creditors and the government.

Leaders of the 17-nation euro area are confronting a tougher approach from the German-led pro-austerity bloc and unrest in Spain over budget cuts and a separatist movement in Catalonia. The first of three summits in the next three months, called “crucial” by European Union President Herman Van Rompuy, is set for Oct. 18-19, as investor sentiment toward the euro area that surged in September is on the wane.

“People are beginning to look at this in a more sober way” after the ECB bond-buying plan and a German high-court decision releasing bailout financing spurred optimism over the past month, Clemens Fuest, an economist at Oxford University’s Said Business School, said in an interview yesterday.

Political discord has underscored the inadequacy so far of ECB President Mario Draghi’s offer of unlimited bond buying to to overcome that squabbling that has hamstrung crisis-fighting efforts. With a report today showing the euro area’s unemployment rate climbed to the highest on record at 11.4 percent, October marks three years since Greece’s newly elected Prime Minister George Papandreou revealed an unexpected hole in his budget, triggering the turmoil.