Via The Irish Economy, a new paper from the IMF looks at how, exactly, massive current imbalances emerged within Europe, with Germany running huge surpluses and the GIPSIs running huge deficits.

The paper shows that there were indeed huge capital flows from the European core to the periphery, in Spain largely taking the form of lending to banks, presumably by other banks: 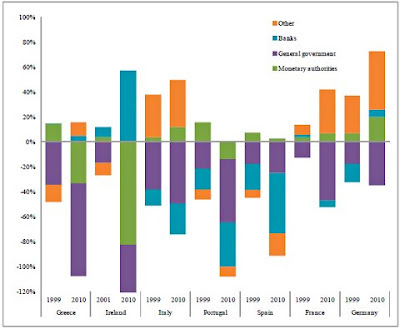 The surprising result in the paper is that much of the rise in imbalances within the euro area involved trade with non-euro nations. Germany sharply increased exports to Asia and Eastern Europe, which had strong demand for German durable manufactures. Meanwhile, southern Europe saw a sharp increase in imports from low-wage countries.