Economics: the failure of European monetary union has been abject

When he was leader of the Conservative party, William Hague once likened membership of the euro to being trapped in a burning building with no fire exit. It was an apt description, as young people in Greece would testify: in a country that has already contracted by more than Germany did during the Great Depression, the jobless rate for Greeks under 25 is 55%.

Little wonder then that Antonis Samaras, the prime minister of Greece, is warning that his country has been pushed to the limit and that there is, as with Weimar Germany, the risk of democracy collapsing.

Little wonder, either, that Spain, only just behind Greece in the youth unemployment misery stakes, is wary of seeking the help offered by the European Central Bank. Unlimited buying of Spanish bonds by the bank will come at a heavy price: more austerity for a population already buckling under the strain.

A study of hundreds of recessions dating from the 19th century shows that most are short, sharp affairs. They are like heavy colds, nasty but quickly over. Every now and then, however, the cold turns into something much more serious and the longer it lasts the more serious it gets.

It becomes more like a pandemic, affecting the immune systems of economies and spreading from one country to another. That is the situation in the eurozone today. 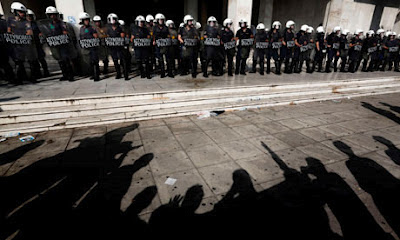 Posted by Yulie Foka-Kavalieraki at 9:15 PM