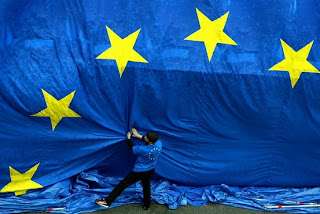 On the day the European Union was awarded the Nobel Peace prize, the world's top financial officials meeting in Japan complained about how Europe's debt crisis is roiling the rest of the globe, while an EU report detailed what the bloc sees as undone to help members act in harmony.

Concern over euro-zone debt foibles was voiced at the International Monetary Fund's annual meetings in Tokyo this week, reflecting fatigue among the world's finance ministers and central bankers as the problem continues to dominate the financial agenda almost three years after the crisis began, and threatens to slam the brakes on global growth.

Large, developing countries urged the euro zone to take tough decisions on bailouts for Greece and Spain that critics say are months overdue.

Officials from both inside and outside the euro zone said the bloc needs to reconsider its strategy of budget cuts that have thrown some countries into deep recession while failing to quell investor skepticism about their public finances.

And worries about the IMF's large exposure to the euro zone have made the fund's board members wary of lending another dollar to prop up the 17-nation currency area.

"The delayed reactions to the crisis, especially in the euro area, have led to the accumulation of intractable problems," said Brazil's finance minister, Guido Mantega, in remarks that will be delivered to the IMF's policy committee Saturday.