U.S. Companies Brace for an Exit From the Euro by Greece 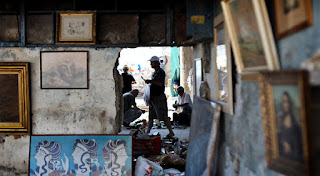 Even as Greece desperately tries to avoid defaulting on its debt, American companies are preparing for what was once unthinkable: that Greece could soon be forced to leave the euro zone.

Bank of America Merrill Lynch has looked into filling trucks with cash and sending them over the Greek border so clients can continue to pay local employees and suppliers in the event money is unavailable. Ford has configured its computer systems so they will be able to immediately handle a new Greek currency.

No one knows just how broad the shock waves from a Greek exit would be, but big American banks and consulting firms have also been doing a brisk business advising their corporate clients on how to prepare for a splintering of the euro zone.

That is a striking contrast to the assurances from European politicians that the crisis is manageable and that the currency union can be held together. On Thursday, the European Central Bank will consider measures that would ease pressure on Europe’s cash-starved countries.

JPMorgan Chase, though, is taking no chances. It has already created new accounts for a handful of American giants that are reserved for a new drachma in Greece or whatever currency might succeed the euro in other countries.