Tick tock: Events as early as next week could challenge the assumption that time is on the euro zone’s side 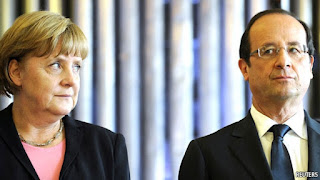 At least August was quiet. Thanks to Mario Draghi, chief of the European Central Bank (ECB), euro-zone policymakers got some badly needed R&R. His promise in July to “do whatever it takes” to protect the euro from speculation was enough to persuade traders to pack their bags and head for the Riviera. Yet the euro zone now looks woefully behind in its mission to save the single currency. That is partly because a rescue is genuinely complicated. But it is also because too many people think that time is on their side.

Just now, sluggishness may seem like an odd accusation. The next month will contain a summer’s worth of news. As we went to press, Mr Draghi was to put flesh on his pledge to limit the cost of medium-term borrowing by governments (and hence companies). On September 12th Germany’s senior court will rule on whether a euro-zone rescue fund is constitutional. The same day the Dutch will vote and the European Commission will unveil its thoughts on a Europe-wide banking supervisor—a step towards a banking union. Within weeks the troika that has just arrived in Athens will report back on whether to give Greece its next slug of rescue money. And all the while, a restless succession of meetings will continue as leaders prepare for a big summit in October.

But, measured against what needs to be done, this is inadequate. Even if the ECB successfully intervenes, the euro zone’s politicians must ultimately determine the euro’s fate. Although work on a banking union has begun, they are many months away from actually setting one up. Leaders increasingly recognise the dangers of excessive austerity, but they still routinely demand harsh budgets as a token of merit. The debate about mutualising some government debt, which this newspaper thinks essential to restoring confidence, has barely begun. The vague German demand to shift political power to federal Brussels has hardly been broached in France.