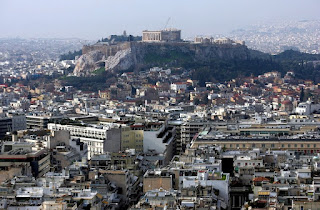 Greece may soon face bankruptcy, but what would happen after that? If governments and central banks want to preserve the euro, they might have to take some very risky steps -- each with its own potential dangers. Europe has begun searching for the lesser of several evils.

Will Greece obtain fresh aid or slide into bankruptcy? Those will be the fundamental issues at stake when Greek Prime Minister Antonis Samaras travels to France and Germany this week for meetings with French President François Hollande and German Chancellor Angela Merkel. Even though the talks won't result in official decisions, the two most important politicians in the euro zone will know after these meetings just what they can still expect from Greece -- and they will draw the necessary conclusions.

For the currency union as a whole, however, the Greek tragedy itself is merely a prelude to the real battle to save the euro. If Greece actually did go bankrupt or left the currency union, the main priority for the rest of the bloc would be to use every means possible to prevent a further dissolution of the euro zone -- even if these means have some quite problematic aspects.

The key issue will be to prevent the remaining crisis countries from suffering the same fate as Greece. The main priority will be to prevent the yields on Spanish and Italian government bonds from rising any further. Spain already has to pay very high risk premiums compared with Germany. For 10-year German government bonds, investors last week demanded an interest rate of about 1.4 percent. For Spanish bonds, the rate was 6.7 percent.

As a result, Spanish interest rate payments are rising even though the government is doing all it can to cut spending. That is making it even harder for Spain to break out of the vicious circle of debt, austerity and recession.

Experts fear that if Greece becomes insolvent, investors will panic and demand higher interest rates from Spain or Italy. That would force the two countries to seek external aid.