The other moral hazard 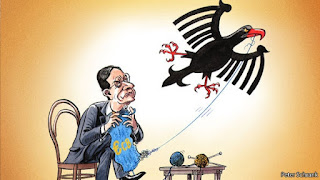 Stitch by stitch, Germany is unravelling the carefully knitted deal that offered the euro zone the best chance yet of overcoming its crisis. Until this week European officials dared to imagine they had got ahead of the markets with two big moves. First, the ECB declared that it will act as a lender of last resort for troubled countries like Spain (if they agree to a reform programme). And second, the euro zone pledged to create a banking union to sever the death loop between weak banks and weak sovereigns. Now that the ECB had averted the threat of the euro breaking up, others have space and time to repair its design flaws.

If only it were so easy. Protests and strikes against austerity have restarted in debtor states, and secessionism is stirring in Spain. Just as worrying, creditor states are showing every sign of going slow, and even reneging, on their promises to strengthen the euro zone. Rückfall, the German word for backsliding, is one reason the euro zone is being pushed back into an acute phase of the crisis.

Start with the conditional promise of intervention by the ECB’s president, Mario Draghi. This is designed to hold down a country’s borrowing costs, especially for short-dated bonds, and dispel “unfounded fears” about the future of the euro. In his campaign to delegitimise the policy, Jens Weidmann, the Bundesbank chief, has resorted to drawing a parallel between Mr Draghi and Mephisto in Goethe’s “Faust”. The German government, though in favour of the ECB’s scheme, is uncomfortable. It has told Spain not to ask for more help—the essential first step that would allow the ECB to act.