The Euro Crisis Is Back From Vacation 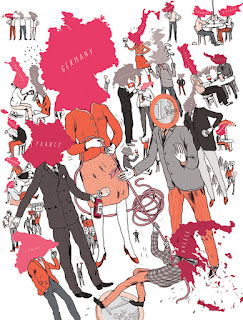 In June, it seemed as if any day might bring about the collapse of the Greek economy and with it, the entire euro zone and its decade-old currency. Then in July and August, it seemed as if everyone was on vacation. Now they’re back — finance officials and political leaders have been flying all over Europe to meet with one another — and along with them the crisis that has been raging for the last two years. Here is a guide to the new season’s most intriguing (and terrifying) story lines.

This month, Greece’s Parliament needs to approve an additional 11.5 billion euros in spending cuts for 2013-14. If it does, it will most likely prompt big protests in the streets. If it doesn’t, the so-called troika (the European Commission, the I.M.F. and the European Central Bank) won’t lend Greece the money to keep its economy afloat. If all sides get through September intact, they’ll still be at loggerheads during the next phase of budget negotiations.

More
Posted by Yulie Foka-Kavalieraki at 8:31 AM