The end of the euro’s Indian summer 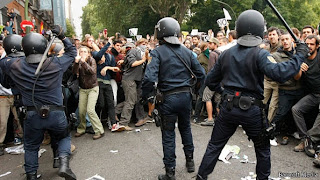 The sugar-rush brought on by the European Central Bank’s pledge to intervene in bond markets to help troubled euro-zone countries—some diplomats call it “Mario Draghi’s ice cream”—was bound to fade at some point. But nobody expected it to fade quite so suddenly this week.

Anti-austerity protests in Spain and Greece, uncertainty over their bail-out terms, the resurgence of Catalan secessionism, the likely departure of Mario Monti as Italy’s prime minister next year, obstacles to creating a credible banking union (see Charlemagne) and a darkening economic outlook all combined to dispel hope that the euro zone was out of the woods. Spanish and Italian bond yields shot back up and European stockmarkets fell.

The summer’s panic about the euro zone had been assuaged by the ECB’s announcement of plans to buy unlimited amounts of short-dated debt of vulnerable countries such as Spain and Italy. This backstop would depend on their governments first seeking assistance from the euro-zone rescue funds, and then submitting to a formal, externally monitored reform programme.

Both out of national pride, and because Germany does not want Spain to ask for more money, the Spanish government has hesitated about taking the ECB’s outstretched hand. Behind European officials’ public praise for the deficit-cutting measures taken by Mariano Rajoy, the Spanish prime minister, there is dismay over his ineptness in handling the crisis, not least the ever-changing estimates of the money needed to recapitalise Spain’s banks.