'The ECB Wields the Baton, Not Karlsruhe' 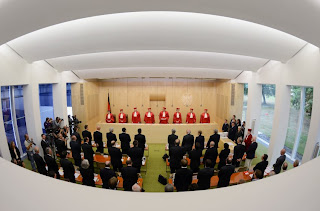 With the green light now given for ratification of the European Stability Mechanism, euro-zone leaders appear to be a step closer to saving the common currency. But many German newspaper editorialists see faults in the ruling by the Constitutional Court and warn that a major new fight is brewing over the European Central Bank's role in efforts to save the euro.

A day has passed since Germany's highest court gave its blessing to the treaty that will cement the euro's long-term bailout fund, but the debate over the rescue program continues. Opponents of the European Stability Mechanism (ESM) had warned that it would strip Germany's parliament of its right to determine the national budget. In a preliminary ruling, the court said Germany could move ahead and ratify the treaty so the ESM can start doing its work.

However, in what the German media has dubbed a "yes, but" ruling, the court also set conditions, demanding, for example, a legally binding statement from the government in Berlin that Germany's total potential liability with the ESM would not exceed €190 billion ($245 billion) unless that change were approved by the German representative on the ESM board.

The ruling also left a number of points open, including what the ESM's future relationship will be to the European Central Bank. Just days before the ruling, ECB President Mario Draghi announced the central bank is prepared to pull out its bazooka and buy up unlimited quantities of government bonds from beleaguered euro-zone countries in order to shore up the common currency. But Draghi also said that the ECB would only initiate a bond-buying program for countries if they first applied for aid through the ESM and submitted to strict reform and austerity measures.

Although a full ruling that takes into account the ECB's decision is not expected until the fall, the court did lay out one clear limitation for interactions between the two institutions. It warned that the ESM could not be bestowed with a banking license in order to borrow money from the ECB. Under current European law, it is only able to raise money from the markets. The court warned that the ESM cannot become "the vehicle of unconstitutional state financing" by the ECB.