The Crisis of Europe: How the Union Came Together and Why It’s Falling Apart

May 10, 1943: German forces are destroying the Warsaw ghetto. Facing armed resistance from Polish Jewish fighters, they set fire to it house by house, burning some inhabitants alive and driving others out from the cellars. "Today, in sum 1,183 Jews were apprehended alive," notes the official report by the SS commander Jürgen Stroop. "187 Jews and bandits were shot. An indeterminable number of Jews and bandits were destroyed in blown-up bunkers. The total number of Jews processed so far has risen to 52,683." An appendix to this document contains the now-famous photograph of a terrified small boy in an outsize cloth cap, his hands held high in surrender. Marek Edelman, one of very few leaders of the Warsaw ghetto uprising to survive, concluded a memoir published immediately after the war with these words: "Those who were killed in action had done their duty to the end, to the last drop of blood that soaked into the pavements. . . . We, who did not perish, leave it up to you to keep the memory of them alive -- forever."

Fast-forward exactly 60 years, to May 10, 2003, a month before Poland holds a referendum on whether to join the European Union. At a "yes" campaign rally in Warsaw, a banner in Poland's national colors, red and white, proclaims, "We go to Europe under the Polish flag." Outside the rebuilt Royal Castle, a choir of young girls in yellow and blue T-shirts -- echoing the European flag's yellow stars on a blue background -- breaks into song. To the music of the EU's official anthem, which is drawn from the final movement of Beethoven's Ninth Symphony, they sing, in Polish, the words of the German poet Friedrich Schiller's "Ode to Joy." Soon these young Poles will be able to move at will across most of a continent almost whole and free, to study, work, settle down, marry, and enjoy all the benefits of a generous European welfare state, in Dublin, Madrid, London, or Rome. "Be embraced, ye millions! This kiss to the entire world! Brothers, a loving father must live above that canopy of stars!"

To understand how a predicted crisis of European monetary union became an existential crisis of the whole post-1945 project of European unification, you have to see Europe's unique trajectory from one May 10 to the other. Both the memories of World War II and the exigencies of the Cold War drove three generations of Europeans to heights of peaceful unification that were unprecedented in European history and unmatched on any other continent. Yet that project began to go wrong soon after the fall of the Berlin Wall, as western European leaders hastily set course for a structurally flawed monetary union. 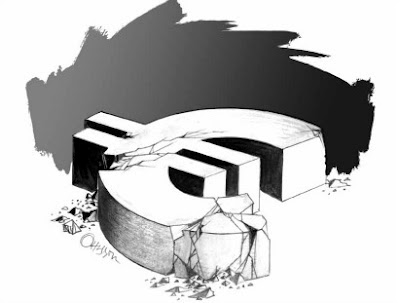 Posted by Yulie Foka-Kavalieraki at 10:58 PM