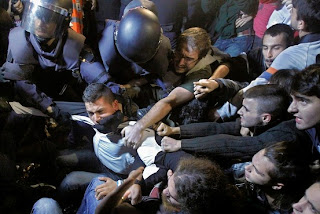 After its biggest rally in months, some old doubts about the euro are creeping back in.

Investors cheered the European Central Bank's proposal to buy the debt of troubled euro-zone members, announced on Sept. 6. But the plan already has hit its first potential snag: Spain, the region's fourth-largest economy, hasn't yet requested aid, a key condition for setting a bailout in motion.

Some euro bears say the ECB's bond-buying plan, which many took as a sign Europe had turned a corner in addressing its debt problems, is turning out to be just the latest temporary jolt for a currency in the middle of a protracted slide against the dollar. Since hitting a four-month high on Sept. 14, the euro is down in six of the last nine trading days, ending New York trading at $1.2913 Thursday. The euro is still up 7% from a two-year low hit in July.

The crisis "is like a long-term illness that flares up periodically, and it's not over by any stretch of the imagination," said Nicholas Pifer, who oversees $7 billion as head of Columbia Management's fixed income group and has bet against the euro. "The history of the euro crisis so far has seen measures announced that looked good but whose implementation proved difficult." 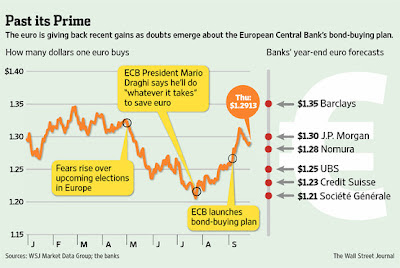 Posted by Yulie Foka-Kavalieraki at 2:34 PM