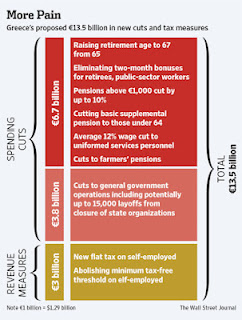 Greece's coalition partners reached a deal on a multibillion-euro austerity plan demanded by creditors, but must jump through several more hoops in the weeks ahead before the country can hope to see any of the cash promised by its European and international partners.

The government must now win approval from creditors and a fragmented Parliament, while facing public protests against the €13.5 billion ($17.4 billion) package, which was settled on Thursday after a last-minute decision to pare back spending cuts and introduce tax measures to plug a €1 billion gap.

Among those who are likely to oppose the austerity plan in the weeks ahead will be Greece's army of self-employed—doctors, lawyers, electricians, plumbers—who have been targeted by the new tax measures.

In an effort to stamp out widespread tax evasion among the self-employed, the government has abolished the tax-free threshold they enjoyed and will now tax them at a 30% rate on all of their income.