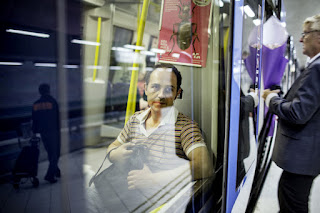 As a pharmaceutical salesman in Greece for 17 years, Tilemachos Karachalios wore a suit, drove a company car and had an expense account. He now mops schools in Sweden, forced from his home by Greece’s economic crisis.

Karachalios, who left behind his 6-year-old daughter to be raised by his parents, is one of thousands fleeing Greece’s record 24 percent unemployment and austerity measures that threaten to undermine growth. The number of Greeks seeking permission to settle in Sweden, where there are more jobs and a stable economy, almost doubled to 1,093 last year from 2010, and is on pace to increase again this year.

“I’m trying to survive,” Karachalios said in an interview in Stockholm. “It’s difficult here, very difficult. I would prefer to stay in Greece. But we don’t have jobs.”

Greece is in its fifth year of recession, with the economy expected to contract 6.9 percent this year, the same as in 2011, according to the Athens-based Foundation for Economic and Industrial Research. Since 2008, the number of jobless has more than tripled to a record 1.22 million as of June, out of a total population of 10.8 million.

“In Greece, there was no future,” said Ourania Michtopoulou, who moved with her husband to Sweden in 2010 after both lost textile industry jobs in Thessaloniki, where they had a comfortable life with a house and car. “Here, I can hope for something good to happen. Maybe not for me -- I’m 48 -- but maybe for my children.”

More
Posted by Yulie Foka-Kavalieraki at 2:07 AM