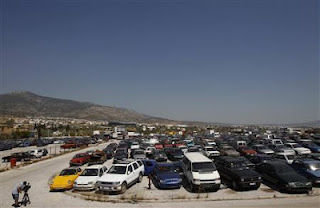 In a sprawling yard in Athens, a yellow Porsche rusts among dusty motorcycles, police cars with bullet holes and wrecked city buses - a telling image of one Greek government agency's slide into bureaucratic quagmire.

Known by its Greek acronym ODDY, the Organisation for Public Property Management ran warehouses nationwide that auctioned off anything from old sofas discarded from city hall waiting rooms to luxury cars confiscated from drug dealers.

Now, efforts to consign ODDY itself to the scrapheap, along with its loss-making payroll costs, show just how hard it is for the Greek government to satisfy foreign creditors' demands that it shut down dozens of state agencies to save money; it may say it is waging war on red tape, but the red tape may be winning.

Set up to offload army surplus after World War Two, ODDY began showing losses a decade ago, squeezed by competition while maintaining dozens of employees on staff. So when some 50 state entities were slated for closure in 2011, ODDY was on the list.