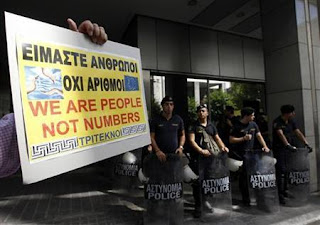 Greece's international official lenders are at loggerheads over how to solve Athens' debt crisis, threatening more trouble for the euro.

Officials from Greece and the "troika" of European Union, European Central Bank and International Monetary Fund have told Reuters tensions have risen in recent weeks as negotiators wrangle over further budget cuts, with the IMF adamant that Greece reduce its debt further.

European officials say the IMF is also pushing them to restructure debts Athens owes them, an uncomfortable prospect for some of Europe's leaders who find the idea of their governments taking losses on the debt politically unpalatable.

Already facing an electoral backlash over bailouts and austerity budgets, and unsure what may be needed to defend the creaking public finances of heavyweight countries like Spain and Italy, EU leaders do not relish the idea of swallowing tens of billions of euros of losses on their official holdings of Greek government bonds.

More
Posted by Yulie Foka-Kavalieraki at 12:53 AM