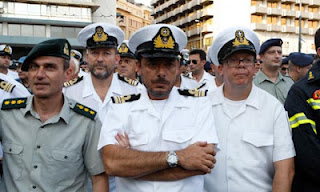 The banner said it all: "Imagine: disabled and poor." The sight of wheelchair-bound protesters demonstrating outside the Greek parliament against the latest round of cuts that Athens must enact in return for rescue loans reinforced the uncomfortable truth that, in the country where Europe's debt drama first began, the crisis is far from over.

While politicians were fixated on Germany's constitutional court ratifying the eurozone bailout mechanism and the general elections in Holland last week, Greece's three-party coalition was locked in fraught negotiations over a new €12.5bn (£10bn) austerity package. The cuts in disability benefits, ordered by debt inspectors from the "troika" of lenders at the EU, ECB and IMF, threw into sharp relief the tough process that the weakest member of the eurozone is being forced to suffer.

For the first time in living memory, military personnel took to the streets alongside police officers, fire brigade officials, teachers and doctors as Greeks vowed to resist further pay and pension cuts that have already led to plummeting living standards.