Greek Premier Sees Hope, but Only if Europe Helps 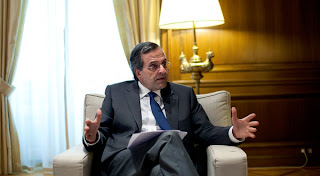 He waited his whole life for this moment, and many European leaders see him as Greece’s last best hope for stability. But for Antonis Samaras, leading his country is no fun at all. “Do you think anyone can be happy being prime minister of Greece?” he asked in a low voice in an interview here on Friday, placing his elbows on his knees. “This is the toughest job in the world. It’s just pain.”

Since coming to power in June after two tumultuous elections, Mr. Samaras has been laboring to restore Greece’s credibility and to dispel all fears that the country could leave the euro, even as the harsh austerity he must impose to keep the country in the common currency stokes a new wave of social unrest.

Sitting in his office at the Maximos Mansion here, he all but declared that he had achieved that goal. “There is absolutely zero risk that Greece is leaving the euro,” he said. But he implied that the conditions for euro membership came at a rising political and economic cost.

On a week when violent protests broke out in Greece and Spain against tighter austerity measures and surging unemployment, and after other mass demonstrations in normally tranquil Portugal, Mr. Samaras warned the international community to pay close attention to “this new social phenomenon” sweeping Europe.

“This is the product of this huge crisis and this huge recession we’re in,” he said. “So that should ring a bell to our allies and to the Western world: that if this happens in Greece and in Spain and tomorrow in other countries, that they should make sure this will not intensify.”

More
Posted by Yulie Foka-Kavalieraki at 8:10 AM