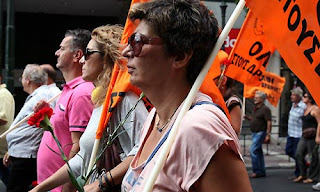 The ailing Greek economy is on the verge of a 1930s-style Great Depression, as the Athens government predicted a 25% fall in GDP by 2014, putting intense pressure on the EU to relax the terms on the country's €130bn (£105bn) bailout package

The finance minister, Yannis Stournaras, said a decline in tax revenues and spiralling unemployment will deepen the country's four-year recession, which critics of the EU's stance said could lead to a recession as long and deep as America's pre-war decline.

Stournaras, who is locked in negotiations over the terms of a second bailout, fears that efforts to revive the Greek economy will be undermined by a draconian austerity programme, early debt repayments and high interest rates on its loans.

"The cumulative reduction (of gross domestic product) since 2008 is just under 20% and is expected to reach 25% by 2014," he told a Greek–Chinese business forum in Athens.

"The time frame for the adjustment, the conditions of the real economy should be taken into consideration," he said. "Otherwise there is a great risk of prolonging the negative consequences for the economy and society."