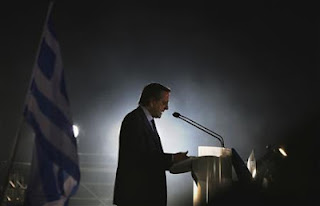 The two main political parties in Greece are facing their own financial crisis. New Democracy and Pasok, the key members of the country's coalition government, are close to being overwhelmed by debts of more than 200 million euros, say rivals, as the big parties head for a slump in state funding because of falling public support.

In Greece's state-financed political system, parties that receive more votes get more funding. Relying on past good results, the big political parties have pledged future state funding as collateral for bank loans. But in the most recent poll their support collapsed, leaving them with big loans and facing much smaller incomes.

Banking sources familiar with the issue say that conservative New Democracy and socialist Pasok now owe a combined 232 million euros to Greek banks. Some of the loans are going unpaid, those sources say. The debts far exceed the combined 37 million euros the parties received in state funding last year - a figure set to decline.

The parties' debts raise questions about potential conflicts of interest because the government is in hock to a financial system that it also needs to reform. Athens is already struggling to implement spending cuts and reforms demanded by the European Union, International Monetary Fund (IMF) and European Central Bank (ECB) in return for the 130 billion euro bailout keeping Greece afloat. On Wednesday unions called a nationwide strike protesting against austerity.

More
Posted by Yulie Foka-Kavalieraki at 11:49 AM