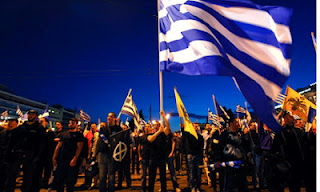 The Greek far-right party Golden Dawn has been flirting with an "outlaw" rhetoric lately. Appealing to a disgruntled electorate, its MPs constantly try to point out that the Golden Dawn is unlike any other political party in Greece. They are right in this respect. In fact, they are not a party at all: they are acting like a gang of criminal thugs, and it should not be beyond the pale to declare their organisation as such.

"We feel disgusted in the parliament," said their leader, Nikos Mihaloliakos, in a speech to his followers on 25 August. "If they want us to, we can abandon it at any given moment and take to the streets. There, they shall see what the Golden Dawn is really about, they will see what battle means, they will see what struggle means, they will see what bayonets sharpened every night mean". Holding torches, they shouted "blood, honour, Golden Dawn" – a direct translation from the German "Blut und Ehre", the motto once carried by the Nazi SA. "It's you who are our Storm Detachments (Sturmabteilung). Let them come after you!" he continued, in his usual Nazi-inspired terms. Singing their official hymn "Raise the flags high" – again, a direct translation of the Nazi stormtroopers hymn "Die fachne hoch" – young men and women call for open, violent conflict both with the state and with any opponents on the ground.

An organisation with explicit ties to neo-nazism, advocating violence and attacking immigrants and anti-racist marches in the street: does this sound like a legitimate democratic party?