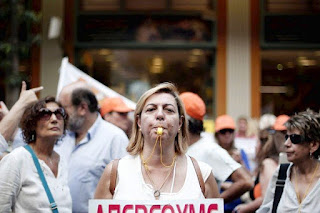 With its whitewashed walls and brightly blooming bougainvillea, Hydra hardly conjures up scenes of confrontation, and certainly not the revolutionary spirit of the Boston Tea Party.

Yet not too long ago, a spontaneous exercise of civil disobedience reminiscent of that by enraged Bostonians, ripped through the harbor of this jagged Greek island, laying claim to anti-tax and libertarian principles and awakening a recession-weary public to an autumn of anger.

At the time of their inspection, about 10 tables being served lacked receipts for platters of grilled octopus, salads and tzatziki dip, the officials said. The owner, Toula Mavromati, was told she would be arrested and sent to a same-day trial on charges of tax evasion.

"My blood pressure shot up," Mavromati recalled. "The customers were still eating. There was no way the bill could have been tallied yet. 'Enough!' I told them. I had just paid 5,985 euros in sales tax the previous month.

"I wasn't about to be brought in for some mezes and tzatziki," she said. "I resisted arrest, refused the charges and then, overwhelmed by what was happening, I collapsed."

As word of the incident spread, hundreds of Hydra's 1,500 residents swarmed the harbor to protest. Some hurled water bottles and projectiles; other hissed at the tax inspectors.

Eventually, clusters of the crowd broke off, marching in two directions. Women flocked to support Mavromati, who had been hospitalized under police surveillance. And a mob made up mainly of fishermen launched an assault on police who had taken Mavromati's younger son, Elias, 27, into custody in place of his mother because he works as the restaurant's manager.

Pandemonium ensued. Grainy clips of the confrontation went viral on the Internet.

By nightfall, residents had cut off water and electrical supplies at the police station. Reinforcements of riot police were called in the next morning to crush the budding revolt.

More
Posted by Yulie Foka-Kavalieraki at 10:34 AM