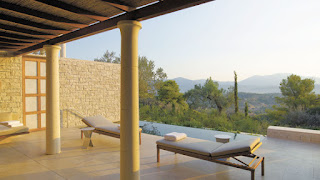 Head west from Athens airport towards the Peloponnese on the E94 highway and you can’t help but be struck that all the roadside hoardings are blank. Either no one in Greece can afford to advertise any more or there’s simply no point in trying to sell to a population with no money. It was only once we’d crossed the Corinth canal, heading south down the Argolid Peninsula towards Amanzoe, the latest addition to Aman Resorts’ portfolio, that we passed the odd poster, almost all of them for a local beer called, somehow appropriately, Fix.

Even so, I was informed there had been Greeks among the 50 or so European, American, Brazilian and Asian guests staying at Amanzoe the week of its opening on September 1, a capacity crowd given that not all the projected 38 “pavilions” are open yet.

Some arrived in the Aman helicopter, an 18-minute hop from Athens. Those up for roughing it took the hydrofoil, an old Russian vessel that used to ply the Volga, from Piraeus to Porto Heli. But most travelled by car, as I did, driven by self-effacing Yannis, one of the hotel’s personable staff drivers. Educated at university in the UK, he’d been a top-level basketball coach, working in China and Qatar, then a sports presenter on Greek television. But that was then. Now 34, with a young family in Athens, he was grateful for a regular wage. In any case, he said, he enjoyed the work: his colleagues were mostly highly educated (one senses there was a high-calibre pool to recruit from); Aman was a good employer; and he got to meet “many very interesting guests”.