Greece embarks on a firesale 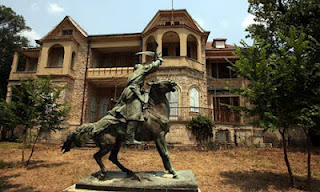 When you hit hard times, it is time to pawn or part with the family silver – and an unprecedented clearout is now under way in Athens.

Greece has announced it will sell anything it can do without – and in the case of the debt-choked nation that means letting go of islands, royal palaces, prime real estate, marinas, airports, roads, the state-owned gas company, lottery and post office. Indeed anything, really, that can be sold.

On Wednesday, the nation learned the downsizing would also include diplomatic residences abroad – starting with the Victorian townhouse that was once the Greek consul general's residence in London.

"There is a decision to lease and sell properties that for various reasons are not being used," said Gregory Dalevekouras, spokesman at the foreign ministry. The foreign ministry's finance department, he said, was hard at work evaluating "market conditions".