German Decision on Euro Fund Is Good, But Not Enough 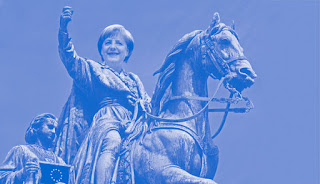 The euro dodged another bullet with today’s decision by Germany’s constitutional court not to block the creation of a European Stability Mechanism, the latest just- in-time measure by the continent’s leaders to save the currency. That’s good news, but not enough.

Far from being reassured, Chancellor Angela Merkel should take the decision as the starting point for a campaign to explain to Germans why saving the euro is in their best interest. If that doesn’t work, she should call a referendum on Europe.

Had the judges in Karlsruhe refused to allow the fund’s ratification, Europe’s already sick economy could have imploded, dragging down the rest of the world with it. So the ruling came as a huge relief, cheering the equity markets and boosting the euro.

But the case also shows that Germans remain reluctant as a nation to do “whatever it takes,” in the words of European Central Bank President Mario Draghi, to rescue the common currency. That reluctance on the part of the euro area’s main creditor will probably continue to prevent a lasting solution to the debt crisis.

That needs to change, and the spectacle of global markets, governments and central banks awaiting the words of eight Germans dressed in red robes and white bibs helps explain why.