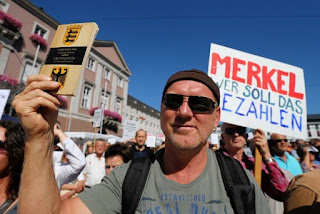 Eight judges in a sleepy German town on Wednesday will decide whether to torpedo European leaders' strategy for taming the euro-zone debt crisis.

The German government and most legal analysts predict the country's constitutional court won't block the currency bloc's planned permanent bailout fund, the European Stability Mechanism. If they are wrong, however, the euro zone could find itself short of authorized funds to prop up struggling members such as Spain, forcing Europe to redesign its safety net for crisis-hit countries.

The Karlsruhe-based court is deciding only whether to grant a preliminary injunction that would suspend Germany's ratification of the ESM, pending a full ruling on whether the ESM is compatible with Germany's constitution, expected in December. But analysts say Wednesday's verdict will send a clear signal about the court's final decision.

More
Posted by Yulie Foka-Kavalieraki at 2:54 AM