For the Euro, a Costly Shelter From the Storm 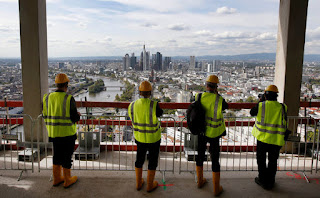 In a bricks-and-mortar declaration that the euro is here to stay and that the European Central Bank is its headquarters, the bank marked a milestone Thursday with a ceremony for its imposing new office towers.

In effect, the new building sets in concrete — and lots of steel and glass — the declaration this month by Mario Draghi, the bank’s president, that “the euro is irreversible.”

But in an embarrassing disclosure for an institution that has preached austerity to countries like Greece and Spain, the central bank said it had encountered a little spending problem. Increases in the cost of materials and unexpected construction problems will add as much as 350 million euros ($450 million) to the original estimated price tag of 850 million euros. That would make it a 1.2 billion euro building.

“There have been a number of unforeseen challenges that needed to be dealt with,” Jörg Asmussen, a member of the central bank’s executive board, said at a reception to observe the completion of the structural frame.

More
Posted by Yulie Foka-Kavalieraki at 8:33 AM