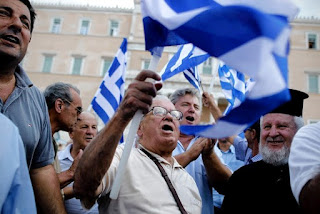 A confrontation is brewing among Greece's international creditors over who will provide the financing needed to keep the country afloat.

A report by international inspectors, due in October, will state how big the funding shortfall is in Greece's bailout program, but European officials say the deficit is far too big for Greece to close on its own.

That means the International Monetary Fund, the European Central Bank, and euro-zone governments such as Germany will have to negotiate over which of them will make painful concessions to ease Greece's debt-service burden. That is intended to avoid a Greek bankruptcy that could force the country out of the euro and reignite financial panic across the currency bloc.

All sides, including Athens, are determined to keep Greece in the euro, officials say—they just don't know how yet.

The trio must agree to a plan by November at the latest, when the government in Athens—already in financial arrears—could run out of money altogether.

More
Posted by Yulie Foka-Kavalieraki at 1:49 AM