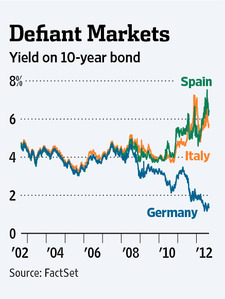 Why does Europe persist in biting the hand that funds it?

European Council President Herman Van Rompuy this week warned of "defiance" by financial markets as countries undertake much-needed policy adjustments. The idea that markets are somehow attacking the euro zone has been understandably popular among politicians seeking to apportion blame. But it is one that should have been discarded by now.

Mr. van Rompuy didn't explain exactly what this "defiance" consisted of. But he said Europe was ready to help Spain further if it persists, in other words, if investors continue to shy away from buying Spanish bonds. Mr. van Rompuy argues that the measures being undertaken by Europe and Spain will clarify the situation of Spain's banking system, restore confidence and stimulate the Spanish economy.

The trouble is institutional investors have reason to be skeptical. It is hardly "defiance" to decline to put other people's cash at risk in Spanish government bonds, given the euro zone's history of grand solutions to the debt crisis that have failed. In fact, given the high level of yields, it is painful for investors not to hold Spanish bonds if they are benchmarked against indexes that include Spain.