European Luminaries: Reflect on Euro 'Seventeen Countries Were Far Too Many' 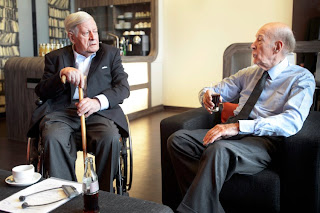 Former German Chancellor Helmut Schmidt and former French President Valéry Giscard d'Estaing are two of the leading architects of the European Union. In a SPIEGEL interview, the veteran statesmen discuss the causes of the euro crisis and the lack of vision among today's European politicians.

Seldom have a German chancellor and a French president seen eye to eye on so many economic and fiscal policy issues as Helmut Schmidt, 93, and Valéry Giscard d'Estaing, 86. During their terms in office, which began in 1974, both had to deal with the oil crisis, stagnating economic growth, rising inflation and unemployment. After the demise of the Bretton Woods international monetary system, in which the dollar served as the world's key currency, they strongly advocated the introduction of the European Monetary System (EMS), with stable yet adaptable exchange rates and the European Currency Unit (ECU), as the standard unit of account.

In 1975, their efforts also led to the founding of the Group of Six (G6), which consisted of the world's leading industrialized countries -- France, Germany, Italy, Japan, the UK and the US -- which met once a year for a global economic summit. After they were voted out of office (Giscard in May 1981, Schmidt in Oct. 1982), they both remained true to their European ideals. In 2001, Giscard was elected chairman of the European Convention, which was tasked with drafting a constitution for Europe. To this day, the two statesmen have maintained a close friendship.

SPIEGEL: Over 30 years ago, you both initiated the establishment of the European Monetary System, which was a decisive preliminary step toward European monetary union. Now, as elder statesmen, do you have reason to fear that you will live to see the collapse of the euro?

Schmidt: The euro will, of course, still exist a few years from now. I am certain that it will outlive me. It could be that it outlives us all, and that is what I assume will happen.

Giscard: The euro will certainly be around longer than us. Your question is interesting because it is highly unusual. Why don't you ask for instance whether the US dollar will still exist in a few years' time, or the Japanese yen or the Chinese yuan?