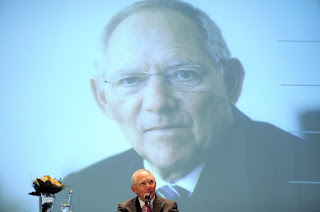 Officially, the ESM permanent euro-zone bailout fund is worth 500 billion euros. That, though, might not be enough, which is why euro-zone governments are now planning to introduce levers that could mobilize up to 2trillion euros, SPIEGEL has learned. Finland, though, is skeptical of the idea.

With the launch of the permanent common-currency bailout fund, the European Stability Mechanism (ESM), just around the corner, euro-zone member states are looking into ways to leverage the €500 billion ($647 billion) available to the fund, SPIEGEL has learned. But with Finland still concerned about the leveraging plans, it is unlikely that they will be initially included when the ESM is launched on Oct. 8.

The plan envisions the continuation of leverage instruments currently in use in the temporary euro bailout fund, the European Financial Stability Facility (EFSF). Should they be applied to the ESM, the permanent fund could be able to mobilize up to €2 trillion instead of the €500 billion lending capacity it currently has -- a size that would make it easier to provide emergency aid to countries as large as Spain and Italy, for example.

The leveraging proposal was a focus of last Friday's meeting of euro-zone finance ministers in Cyprus. German Finance Minister Wolfgang Schäuble is in favor of the plan, sources told SPIEGEL. But Finnish Finance Minister Jutta Urpilainen is worried that such a change is dramatic enough that it would require the ESM to be resubmitted to Finnish parliament for approval.

Plans for leveraging the ESM envision creating a vehicle to attract private investors as was created for the €440 billion EFSF last year. For the temporary fund, the plan called for protecting investors against the first third of losses they might sustain on purchases of EFSF bonds. In addition, to attract additional private funding, potential investors were promised that the euro zone would cover the riskiest portion of, for example, purchases of Spanish government bonds. Private investment would cover the rest of such purchases.

Finland, however, is worried that adopting such a plan for the ESM would conflict with the ESM's preferred creditor status, which stipulates that the fund be paid back prior to other creditors.