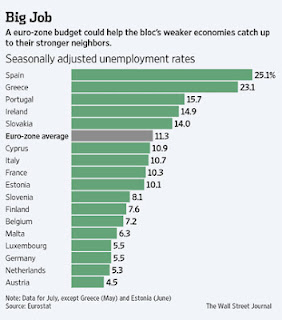 Euro-zone governments have begun discussions about creating a central budget for the currency union aimed at smoothing over some of the region's economic divergences, after Germany indicated support for the idea, European officials say.

The discussions are part of a push toward a limited "fiscal union," after the economic crisis revealed fatal flaws in the setup of the common currency. Those limitations have manifested themselves in the recessions that have engulfed countries such as Greece, Portugal and Ireland after the 2008 financial meltdown, while strong economies such as Germany have recovered much faster.

Until now, much of the fiscal-union debate has focused on the prospects for issuing joint euro-zone debt—so-called euro bonds—but that idea has been blocked by fierce opposition from Berlin and the fact that it would contravene a central element of European Union treaties.

It is partly because of that resistance that the debate has now shifted to a centralized budget for the euro zone that could be financed by rerouting a slice of national taxes, such as corporate tax or value-added tax, to Brussels, rather than issuing euro bonds, according to European officials.

The idea was included in a paper on the overhaul of the euro zone prepared by European Council President Herman Van Rompuy, which formed the basis of talks between the council and member states in Brussels last week.