Euro Ruling Not as Simple as It Seems 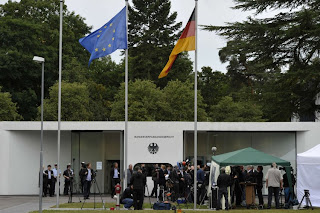 The winners and losers in Wednesday's ruling on the permanent euro bailout fund by Germany's highest court may appear clear cut, but the decision is more complicated than it seems. Before the European Stability Mechanism can be ratified, the German government must answer complicated legal questions.

In its press release on Wednesday, Germany's Federal Constitutional Court said that the petitions for the issue of temporary injunctions that would block the ratification of the European Stability Mechanism (ESM) had been "unsuccessful for the most part." But "for the most part" does not mean "entirely". Indeed, in the aftermath of the ruling, the roles of winners and losers are not as clear as they may have seemed at first glance.

It would, of course, be going too far to say that the verbal lapse of court President Andreas Vosskuhle was a Freudian slip. Right in the first sentence of the text of the ruling, Vosskuhle involuntarily caused a wave of laughter when he said that the petitions were "for the most part well-founded" -- which would have meant that the plaintiffs had won. Vosskuhle corrected himself with a laugh, saying that the petitions were actually "unfounded."

But the slip of the tongue reflects a deeper truth. Nobody seriously believed that the plaintiffs, led by the stubborn conservative Bavarian politician Peter Gauweiler, would win an outright victory. But the court's ruling contains a number of details that could cast a shadow over the winning side's victory, and possibly grant a not insignificant triumph to the other side -- which is why Gauweiler himself spoke of a "huge success."