Euro or No, Economics of Everyday Greek Life Is Eroding 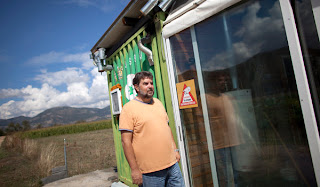 Gregoris Skouros stepped out of the sawed-off cargo container that hard times have forced him to make his home in on an agricultural plain near this tiny village, a two-hour drive south of Athens.

When a visitor raised the issue on everyone’s minds — Greece’s future in the euro zone — Mr. Skouros pursed his lips for a long moment before speaking.

“The problem has now gone beyond whether we remain in the euro or not,” said Mr. Skouros, 54. “The issue is, Can Greece be fixed?”

That question has taken on new urgency as Prime Minister Antonis Samaras makes a renewed effort this week to assemble an austerity budget package that can persuade Greece’s creditors to release a 31.5 billion euro ($41.1 billion) loan installment for the country in October. Even now, auditors from Greece’s troika of international lenders are examining the books in Athens to determine whether the country is on track to repair its tattered finances.

But even if Greece receives yet another lifeline from its European partners, many Greeks have reached their own conclusion: It doesn’t matter.