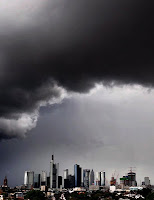 EU Commissioner Michel Barnier has asked experts to examine the possibility of splitting up major European banks to avoid future bailouts at taxpayers' expense. But even less radical intervention in the banking sector could have drastic consequences for the industry, and its powerful lobby is resisting any such change.

If Anshu Jain and Jürgen Fitschen had been searching for a title for their joint appearance last week, "The Inseparables" would have been a fitting choice. The new co-CEOs of Deutsche Bank were constantly putting their heads together, whispering to each other and then turning to the assembled journalists in Frankfurt to explain that they -- "Jürgen and I" or "Anshu and I" -- planned to turn Deutsche Bank into a better company.

But to the two men, another message was even more important than the avowal of their close partnership, namely that Deutsche Bank, too, is inseparable.

Jain and Fitschen made it clear that they intend to transform Deutsche Bank into the world's leading universal bank. When responding to the question of what would happen to their strategy if politicians were serious about their plans to split up large banks, the two top executives feigned innocence. "We have no plan B," said Fitschen, noting that they had not received any indications from Brussels or Berlin that there was any need for discussion of any such eventualities.