Democracy loses in struggle to save euro

The European Central Bank has fired its magic bullet. By promising “unlimited” purchases of sovereign bonds, Mario Draghi, the ECB’s president, may have kept his pledge to do “whatever it takes” to save the euro. But in rescuing the currency, Mr Draghi’s magic bullet has badly wounded something even more important – democracy in Europe.

As a result of the ECB’s actions, voters from Germany to Spain will increasingly find that crucial decisions about national economic policy can no longer be changed at the ballot box. In Germany, in particular, there is a growing realisation that the ECB, an unelected body that prides itself on its independence from government, has just taken a decision that has profound implications for German taxpayers – but one that they cannot challenge or change.

At the ECB, the president of the German central bank has just one vote – the same as the presidents of the central banks of Malta or Slovenia. Jens Weidmann, the head of the Bundesbank, cast the sole vote against the bond-buying plans. 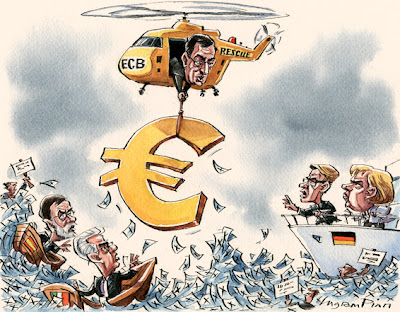 Posted by Yulie Foka-Kavalieraki at 9:59 PM