Democracies and debt: Voters are now facing a harsh truth 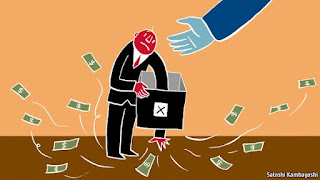 Almost half the world’s population now lives in a democracy, according to the Economist Intelligence Unit, a sister organisation of this newspaper. And the number of democracies has increased pretty steadily since the second world war. But it is easy to forget that most nations have not been democratic for much of their history and that, for a long time, democracy was a dirty word among political philosophers.

One reason was the fear that democratic rule would lead to ruin. Plato warned that democratic leaders would “rob the rich, keep as much of the proceeds as they can for themselves and distribute the rest to the people”. James Madison, one of America’s founding fathers, feared that democracy would lead to “a rage for paper money, for an abolition of debts, for an equal division of property and for any other improper or wicked projects”. Similarly John Adams, the country’s second president, worried that rule by the masses would lead to heavy taxes on the rich in the name of equality. As a consequence, “the idle, the vicious, the intemperate would rush into the utmost extravagance of debauchery, sell and spend all their share, and then demand a new division of those who purchased from them.”

Democracy may have its faults but alternative systems have proved no more fiscally prudent. Dictatorships may still feel the need to bribe their citizens (eg, via subsidised fuel prices) to ensure their acquiescence while simultaneously spending large amounts on the police and the military to shore up their power. The absolute monarchies of Spain and France suffered fiscal crises in the 17th and 18th centuries, and were challenged by Britain and the Netherlands which, though not yet democracies, had dispersed power more widely. Financial problems contributed to the collapse of the Soviet Union.