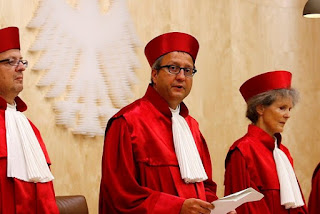 Germany's highest court Wednesday threw out attempts to delay the country's ratification of the European Stability Mechanism and the so-called "Fiscal Pact" but placed strict conditions on expanding it beyond its foreseen limits.

The ruling, which was broadly as expected, removes a major question mark over two crucial elements of the euro zone's plan to manage its debt crisis. It paves the way for the creation of a permanent bailout mechanism in the region that will be able to provide large-scale financial assistance to heavily indebted euro-zone economies.

The news was welcomed by European and German politicians. The head of the euro zone's college of finance ministers, Jean-Claude Juncker, who is also Prime Minister of Luxembourg, said that following the court's decision he will convene the first meeting of the ESM's board of governors on Oct. 8 in Luxembourg.

Read the Press Release of the court