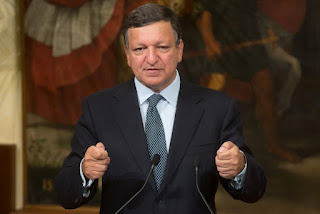 On Wednesday, European Commission President José Manuel Barroso is expected to unveil his plans for a unified banking supervisory system led by the European Central Bank. It is intended to break a vicious cycle of crisis-shaken banks and bailouts. But the plan is facing some resistance from Germany.

José Manuel Barroso wants to present himself as a true president of Europe. Following the example of American presidents, this Wednesday morning he will address the 754 representatives of the European Parliament in Strasbourg, giving a speech on the state of the European Union. He will evoke the dangers of the financial crisis -- and then present a way out.

The representatives in Brussels have been working all summer on this solution: By the end of the year, they plan to have a common banking union in place for the 17 euro-zone countries, a unified supervisory system led by the European Central Bank (ECB) in Frankfurt. The banking union is intended to break a vicious cycle of crisis-shaken banks and governments forced to shell out massive amounts of aid.

"Barroso wants to make it into Europe's history books," says one of his commissioners in Brussels. The president of the European Commission, the EU executive, has taken personal responsibility for creating this new system, taking it out of the hands of Internal Market Commissioner Michel Barnier, to whose portfolio a responsibility like that would usually belong. Barroso wants to turn over supervision of all 6,000 banks in the euro zone to the ECB; he will also present plans for joint bank supervision and for deposit insurance. Both these plans have the same ultimate effect: German savers and taxpayers will be made liable for problems experienced by all euro-zone banks. 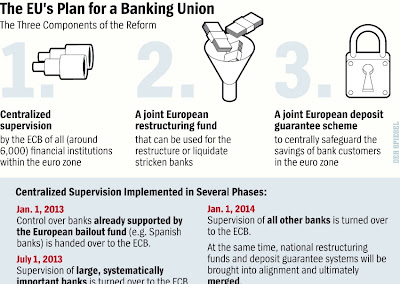