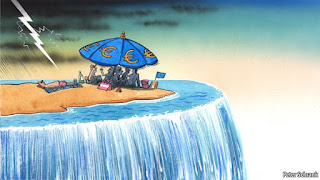 What a miserable summer for Europe’s leaders. Away hiking in northern Italy, Angela Merkel spoke by phone to Mario Monti to promise to do “everything necessary” to preserve the euro. The Italian prime minister then toured European capitals seeking help to hold down his country’s borrowing costs. Meanwhile Wolfgang Schäuble, the German finance minister, hosted the American treasury secretary, Tim Geithner, during his holiday on the German island of Sylt. And the man everybody is watching, Mario Draghi, president of the European Central Bank (ECB), promises: “I will not be going to Polynesia—it’s too far.”

But if the holiday is already a write-off, September promises to be worse: a rentrée chaude, a “hot” return to work. Several things are likely to bring the euro crisis to a head. These include the prospect that Greece may run out of money and drop out of the euro, continuing meltdown in Spain, awkward elections in the Netherlands, a legal challenge in Germany’s constitutional court and political resistance to a more integrated euro zone. All told, the autumn of 2012 may determine the fate of the euro.

Start with Greece. Come September the wreckage of Greece’s public finances will become more obvious. The matter lies half-hidden behind technical discussions, but the “troika” of officials from the ECB, the European Commission and the IMF will eventually have to produce a report. The word is that the shortfall in Greece comes to tens of billions of euros.

To stay afloat, Greece needs both more austerity and more money. Both may prove politically impossible. Having already agreed to two bail-outs for Greece, its exasperated creditors are in no mood to provide a third—particularly not one that may require them to forgive a big chunk of Greece’s official debt.